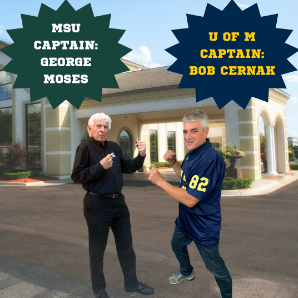 A popular fundraiser that pits Wolverine and Spartan fans against each other for the benefit of a local dental clinic is fast approaching.

The event is now in its 14th year and is VINA’s major fundraiser. It’s a competition between Michigan and Michigan State fans to see who can raise the most money for the non-profit and it all starts with the purchase of sponsorships, tickets and online auction items. Everyone designates which team they want their funds to go towards, or they can just go neutral. It’s all tallied up at the end of the night at the event and a winner is declared. The winning school’s flag hangs in a window at VINA until the next year’s Tailgate.

The night consists of a silent auction with more than 100 silent auction items, including fall décor, fan gear, golf packages, collectible items, gift cards and tickets to various experiences and sporting events. There will also be a live auction for tickets to the Michigan vs. Michigan State football game this year.

In addition to the silent auction, Tailgate tickets give attendees access to a buffet of tailgate food, raffles, a cash bar, cornhole games and a fun atmosphere with the Brighton High School marching band and banter between fans and this year’s Tailgate captains.

There are two returning team captains this year – both of whom have led their teams to a VINA Tailgate victory in the last two years. Bob Cernak was the Michigan captain last year when the Wolverine fans won the Tailgate and George Moses was the Spartan’s captain in 2020 when Michigan State fans won the virtual Tailgate fundraiser. Both are alums from their respective schools and are well-known in the Livingston County community.

Executive Director Jim Gilmore tells WHMI the event has become quite a tradition and is a good time with the captains bantering back and forth all night. It’s all in good fun but he says the larger focus is really on supporting VINA in raising funds and awareness so the clinic to continue to provide low-cost dental care for low-income adults in Livingston County.

Gilmore says the event makes up around 20 to 25% of their budget so it really is a big event for VINA. He says they serve roughly 1,500 to 2,000 clients a year at their clinic in Brighton – noting they’ve really seen a big influx in the number of seniors over the past five years. Gilmore says VINA typically picks up between 10 to 15 new patients every month and also offers programs for low-income veterans.

More information about the event is attached and a link to the full interview with Gilmore is provided.