Out into the frying pan, into the fire. After facing untold racism at the borders in their flight out of Ukraine, Nigerian students are dealt with another punishing blow: their degrees obtained from medical colleges in Ukraine will not be accredited.

On June 18, 2022, the Medical and Dental Council of Nigeria (MDCN) issued an official statement on its website to inform the public that any dental or medical degrees obtained from Ukrainian universities in 2022 will not be recognised until regular academic activities resume.

MDCN instead advised the affected students to transfer to other accredited medical and dental schools abroad to complete their programmes.

“For the avoidance of doubt, Council categorically states that online medical training done in any part of the world is short of acceptable standard and is not recognised by the MDCN,” read the statement.

This means that any medical or dentistry degree from abroad continued online due to COVID-19 travel restrictions would not be accredited as well.

The laconic and formal delivery of the statement was met with a swift rebuke from students, who’ve now been told that their hard work amounts to nothing. The news is especially crushing to those who entered medical colleges in Ukraine years ago and were set to complete their studies this year.

Thousands of Nigerian students fled Ukraine in batches after facing untold difficulties, including violent racism at the border in fleeing to safety. Source: Kola Sulaimon/AFP

“This policy is inhumane. It is devastating because we did not study online for six years, it is only a few months in 2020 due to Covid which happened all over the world and the remaining three months,” Esther Ebiru, who graduated from Dnipro State Medical University last month in an online ceremony, told the Premium Times. “I am clearly devastated and tired. I cannot imagine waiting for this war to be over or restarting again.”

Ebiru, who even paid for a clinical attachment in Nigeria upon her return, had planned to register for the MDCN examination tutorials to prepare for her assessment exam, which would have qualified her work locally.

Another medical student, Moses Damilola Fehintola, was similarly stumped by the new ruling. “The news hit me really hard… So many thoughts flooded my mind,” he recalled to BBC News. “I was actually looking forward to graduating from Ukraine irrespective of whatever happened.”

He had been in his sixth and final year at Sumy State University, and was just a few months shy of graduating when the Russian invasion happened. Sumy was one of the cities that were hit hard by constant shelling, leaving many trapped and cut off from help. Fehintola was one of them, and it took him weeks before he safely returned to his home country.

“We want to serve our fatherland,” he added. “We want to help save lives in our own community, that’s what pushed us into becoming doctors in the first place.”

He had fully intended to perform his duties locally, but the plan must now be scrapped under MDCN’s directive. “I will say this to Nigeria: if that’s what Nigeria wants, so be it. I will look for other countries to practise and that will be Nigeria’s loss.” 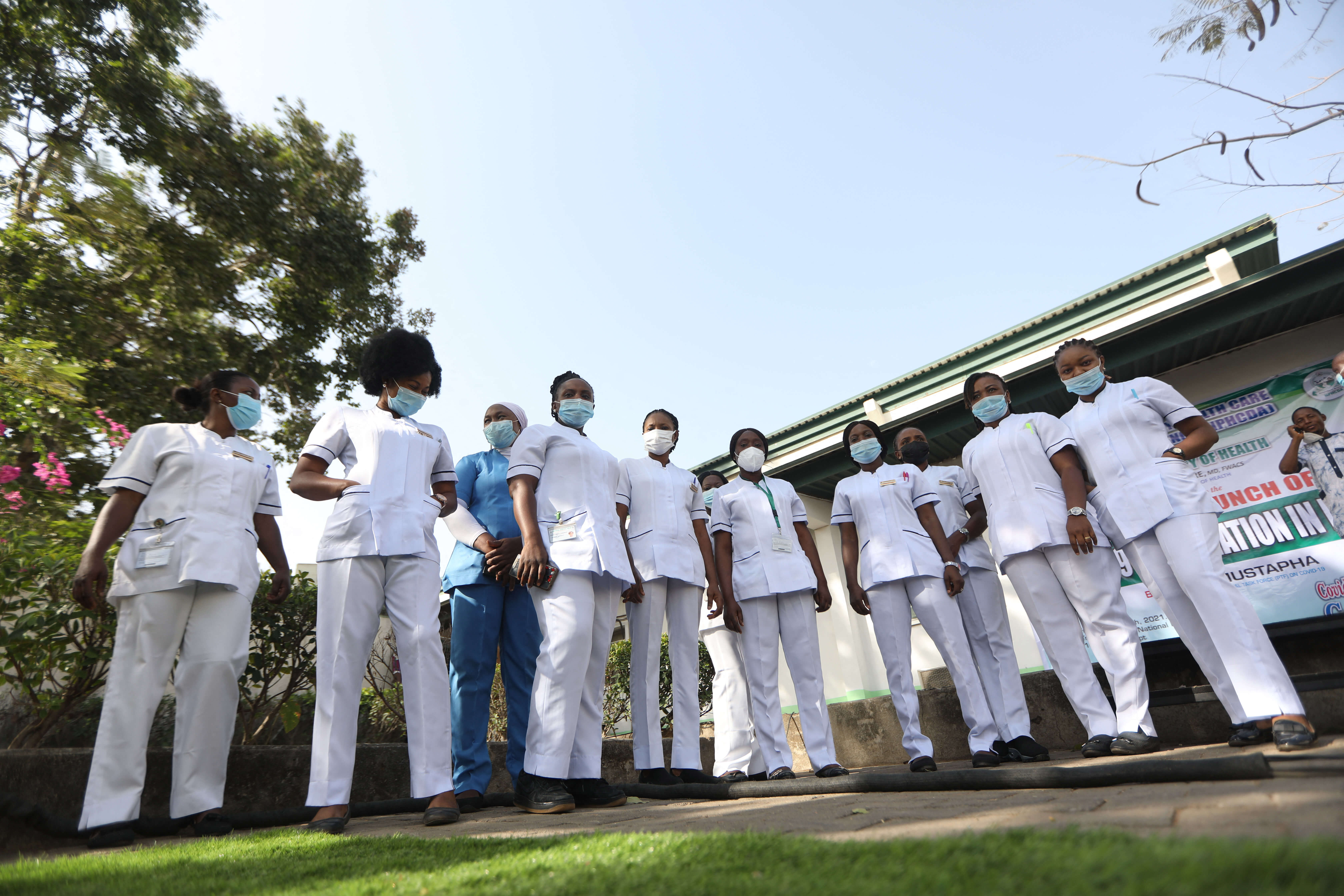 The Nigerian healthcare system has been hit hard by an escalating brain drain problem, with thousands of doctors and nurses fleeing the country to find employment abroad. Source: Kola Sulaimon/AFP

There are approximately 4,300 Nigerian students registered in medical colleges in Ukraine, making them the fifth-highest international student community in the war-torn country. Up until Russia’s invasion in February, Ukraine was a popular destination for an MBBS degree among Nigerians due to its affordable tuition and living costs.

Without offering a local alternative, MDCN’s decision risks alienating more talented graduates in the country, who are now emigrating in droves as a result of high inflation and flagging economy. Its healthcare sector in particular is feeling the pinch of brain drain, taxing the state hospital system.

The PUNCH reports that at least 8,983 Nigerian-trained doctors were working in the UK, and over 270 were licensed between December 2021 and April 2022.

Meanwhile, at least 7,000 nurses have allegedly left Nigeria in 2021 to work abroad. The mass exodus of qualified healthcare professionals has overtaxed the state hospital system, with many local doctors lamenting long working hours and salary delays.