A Dodge Charger that crashed into a building in Canyon Country burst into flames just after midnight on Sunday, critically injuring several occupants and destroying multiple vehicles.

Around 12:40 a.m. Sunday, emergency responders received reports of a vehicle crash into a Dental Center on the 26000 block of Rainbow Glen Drive in Canyon Country, according to Michael Pittman, a dispatch supervisor with the Los Angeles County Fire Department.

BREAKING: At least two people were critically injured and rushed to a trauma center after a Dodge Charger slammed into another car and landed inside a building. pic.twitter.com/0wmN4qZ2sH

A witness to the collision called 9-1-1 to report the crash, before congregating with a group of bystanders to extricate the four occupants from the vehicle.

“We received a call that a vehicle struck a building,” Pittman said.

With emergency responders in route, the group of bystanders broke a window and began pulling the occupants – some trapped and some unconscious – from the Dodge Charger, just before the vehicle sparked flames.

“When we arrived on-scene, we learned the crash caused a fire that was quickly spreading into the structure,” Pittman said.

A commercial structure response was initiated, and multiple vehicle occupants were transported to a trauma center with critical injuries sustained in the crash, according to Fire officials.

Firefighters remained on-scene for more than an hour as they worked to fight the blaze and inspect the foundation of the building, according to witnesses.

While the exact cause of the crash remains unknown, witnesses described seeing the Dodge Charger street racing with another vehicle, before colliding and crashing into the Dental Center. 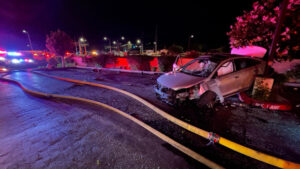 The second vehicle suspected to have collided with the Dodge Charger slammed into a light post in the nearby parking lot. Photo Courtesy of Austin Dave

The crash remains under investigation, and no charges have been released to the public as of 1 p.m. Sunday. 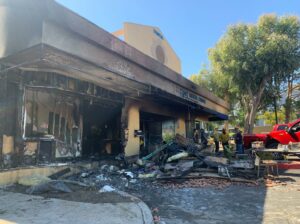 The building remained under supervision of the Los Angeles County Fire Department for more than ten hours. Photo by Linsey Towles

Ed. Note: This is a developing news story, more information will be added as it becomes available.

Do you have a news tip? Call us at (661) 298-1220, or send an email to news@hometownstation.com. Don’t miss a thing. Get breaking KHTS Santa Clarita News Alerts delivered right to your inbox. Report a typo or error, email Corrections@hometownstation.com

KHTS FM 98.1 and AM 1220 is Santa Clarita’s only local radio station. KHTS mixes in a combination of news, traffic, sports, and features along with your favorite adult contemporary hits. Santa Clarita news and features are delivered throughout the day over our airwaves, on our website and through a variety of social media platforms. Our KHTS national award-winning daily news briefs are now read daily by 34,000+ residents. A vibrant member of the Santa Clarita community, the KHTS broadcast signal reaches all of the Santa Clarita Valley and parts of the high desert communities located in the Antelope Valley. The station streams its talk shows over the web, reaching a potentially worldwide audience. Follow @KHTSRadio on Facebook, Twitter, and Instagram.