A BLOKE claims he has been forced to remove his own teeth for 15 years because he has been unable to book an NHS dentist appointment.

David Sergeant, 50, says he psyches himself up for the DIY procedures by using booze and Ibuprofen to numb the pain.

He has even resorted to using pliers to pluck out his problematic teeth over the years to put a stop to his agonising pain.

The former butcher – who sports an almost toothless grin – claims he has been battling to bag a dentist appointment for over a decade.

But the 50-year-old says no practice will take him on – despite even approaching them with referrals from doctors.

David, from Seacroft, Leeds, has now grown used to loosening his rickety teeth, yanking them out and waking up with “a bit of blood” smothering him. 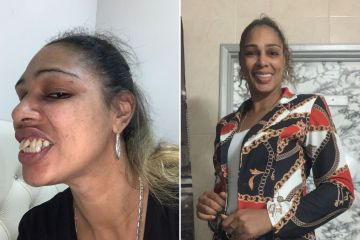 He told Leeds Live: “I’ve been pulling my own teeth out.

“I can’t get an NHS dentist, for ten or 15 years. I’ve tried referrals from the doctors and there’s nowhere that will take me.

“I have a couple of beers and fill myself up with ibuprofen and out it comes. Next morning there’s a bit of blood.

“It doesn’t feel very good. At the end of the day, I’m having to pull my own teeth out when I should have somebody looking after me.”

The NHS insists reforms have been brought in to allow dental practices to take on more patients.

They staunchly advise against self-treatment, instead telling Brits to call 111 or get in touch with a local dental practice.

Hundreds of people across the nation ended up resorting to DIY dentistry during the height of lockdown as they were unable to seek professional help.

But they were warned removing your own teeth often leads to permanent damage and expensive treatment to fix it.

An NHS spokesperson said: “Anyone with concerns about their dental health should contact a local dentist practice as they usually would or seek advice from NHS 111.

“Recently announced reforms to dentistry services are supporting practices to improve access including by giving high performing practices the opportunity to increase their activity and treat more patients – with discussions around further changes that benefit patients and staff ongoing.

“Infection prevention and control measures to protect staff and patients were introduced during the pandemic, limiting the number of procedures that NHS dentists could carry out, however these have now been lifted so dental teams are operating at full capacity for the first time in two years.”

As well as his dental woes, David is feeling the pinch of the cost of living crisis too.

The ex-butcher, who struggles with his mental health and receives Disability Living Allowance, says he can barely afford basic items.

The 50-year-old continued: “I’ve just raided my copper jar just to get a pint of milk.”

He admitted he sometimes struggles to buy food for his pet dog Ash, a 12-year-old Japanese Akita, but his pals step in to lend him cash.