The two main inorganic components of a tooth are dentin and enamel, and each has special qualities that benefit the other. The enamel’s firmness safeguards the dentin and pulp tissue, the tooth’s underlying important components, from damage while the dentin’s flexibility gives the tooth its overall flexibility and helps prevent the enamel from fracturing. There are currently no substitutes for this ideal blend of nature in restoration materials. Therefore, it is always best to keep as much of the original tooth structure as possible.

For this type of restoration, bondable restorative materials, typically dental ceramics and resin-base materials, as well as a dental adhesive system and resin cement, are advised. The goal is to preserve as much of the natural tooth structure as possible, which must be balanced with the need for the restoration to have a high fracture resistance to chewing pressures. However, there are currently few unambiguous recommendations for conservative tooth preparation before a ceramic overlay.

In this study, the authors discussed the fracture resistance of adhesive ceramic overlays with varied designs. Eight groups of 48 upper premolar teeth were created. The variations included contra bevel margins on the buccal and lingual surfaces, shoulder margins on the buccal and lingual surfaces with axial wall heights of 1, 2, or 3 mm, one shoulder margin with an axial wall height of 1, 2, or 3 mm on the lingual surface and one contra bevel margin on the buccal surface, and control of sound teeth. Lithium disilicate ceramic with zirconia reinforcement was used to design and create the overlays, which were then cemented with resin cement.

The team conducted thermocycling and dynamic fatigue tests on the samples to simulate six months of use. Compressive loading was used up till fracture, and the mode of fracture was studied. The majority of fracture patterns included pulp tissue and occurred below the CEJ, and the results demonstrated no statistically significant difference in fracture resistance between designs. The restored teeth’s resistance to fracture was statistically coherent with the control’s.

The researchers demonstrated that all control fractures occurred above the CEJ and within the dentin. As a result, axial wall heights and margin types had no bearing on this outcome, and overlay restorations were successful in strengthening damaged teeth and granting fracture resistance comparable to sound teeth. This study aimed to evaluate the margin preparation designs and fracture resistance of various axial wall heights for adhesive ceramic overlays. The null hypothesis stated that the fracture resistance of bondable glass ceramic restorations was unaffected by various overlay preparation designs. 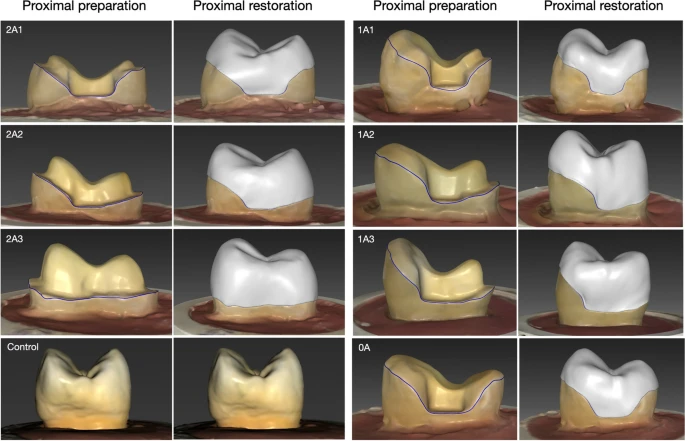 This was true even though there was no difference in fracture resistance between the various designs. When the remaining tooth structure needed to be strengthened, as in cases of broken teeth or teeth that had root canal treatments, an axial wall height of at least 2 mm was advised.

According to the observed fracture patterns, regardless of the design employed, the dominant pattern corresponding to the restoration samples was found between the lingual and buccal cusps, implicated the pulpal tissue, and was located below the CEJ. Although there was no statistically significant difference in the fracture resistance between the sound teeth and the restored teeth, there was a notable distinction in the fracture patterns.

The characteristics of the observed fractures are shown in occlusal view (uppercase letters) and proximal view (lowercase letters). In the control group, the fracture was always within the dentin (A) and it was always above the CEJ (a). In the overlay-restored groups, four of the forty-two specimens involved only the restoration and dentin (B) and three of these unusual specimens were above the CEJ (b). All of the other overlay-restored specimens fractures involved pulp tissue (C and D) below the CEJ (c and d). Roughly half of those specimens fractured across the middle of the tooth (C and c), and in the others a large portion of the tooth fell off (D and d). Image Credit: Channarong, W et al., Scientific Reports

In conclusion, this study discovered that the bondable ceramic overlays’ kind of margin and axial wall height had no discernible effect on the restorations’ ability to resist fracture. The authors mentioned that depending on the materials being used, different amounts of tooth structure might need to be removed. The elasticity modulus of dental enamel with lithium disilicate ceramic was about 80 GPa.

The team stated that the fracture resistances were identical whether or not the lingual cusps were wrapped around the shoulder borders.


Disclaimer: The views expressed here are those of the author expressed in their private capacity and do not necessarily represent the views of AZoM.com Limited T/A AZoNetwork the owner and operator of this website. This disclaimer forms part of the Terms and conditions of use of this website.