Skip to content
The first and only FDA-cleared robotic dentist in the United States is hard at work in metro Phoenix.
click to enlarge

This robot, named Yomi, is assisting with dental surgeries in Chandler.

Like R2-D2 or Johnny 5, the Yomi robotic dental system from Miami-based Neocis Inc., the first-ever dental robotics company, has an important job to do.

But this is no movie. It’s real life.

Around the time Star Wars and Short Circuit were released in theaters, Chandler-based Dr. Leslie Fish became one of the first dentists in the world to place a dental implant.

“I was a pioneer in the field of implant dentistry,” Fish told Phoenix New Times on Thursday.

It was at the University of California-Los Angeles Medical Center in 1982, a time when robotic dentistry “wasn’t even a fleeting thought,” Fish said.

Yomi provides guidance to dental surgeons as they conduct implant procedures. Like a GPS system, Yomi’s computerized navigation system helps in both the planning and surgical phases of dental implantation surgery.

Fish and his partner, Dr. Lisamarie Sarhangian, have already completed more than 1,500 implant surgeries with the help of their mechanized friend. 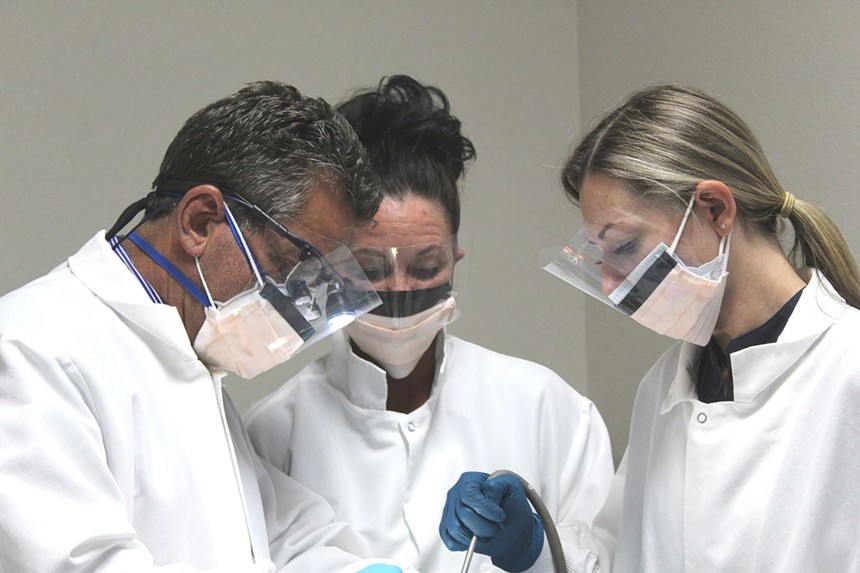 Yomi helps out with every single procedure, even the most basic techniques that, according to Fish, “you could do with your eyes closed,” so practitioners can master the new technology.

“It’s not Los Angeles or New York City, but the people in Phoenix are educated and have high expectations,” Sarhangian said. That’s why Phoenix was the perfect city to debut the technology, especially in a suburb defined by the engineering sector.

The robot set the East Valley dentists back nearly $300,000, but it was a worthy investment in November 2019.

Yomi clocked into work at Fish and Sarhangian LLC just before the coronavirus pandemic rocked Arizona and has been indefatigable in helping patients ever since. Taking a step back from a schedule typically overbooked with routine dental care gave Fish and Sarhangian the chance to get to know Yomi a little better.

“I can do the procedures myself — I have since the 1980s,” Fish said. “But I am only human. Between my surgical skills and the robot, I am more accurate. Human experience mixed with technology is a winner.”

Roughly 4 million dental implant procedures are performed annually in the United States. Until now, getting a dental implant has been an arduous task, requiring repeated office visits over an extended period of time because the affected area needs time to heal before further procedures can continue.

Because of the precision of the Yomi robotic system, within one office visit, a patient can have their tooth extracted and walk out with a viable one in time for their next meal with far less downtime and discomfort as compared to conventional surgery, Neocis claims.

The company routinely sends people to Chandler to observe the process.

“The world leader of robotic implant surgery is right here in Chandler, Arizona,” Fish said. “This is where it all starts. It’s in its infancy, but it is incredible technology.”

Yomi, the robot dentist, has a built-in tracking and feedback system connected to the patient that can track any movements that occur during the procedure. The feedback is broadcast on this computer screen.

The robot dentist has attracted patients from all over the United States.

Linda Tendler flew in from San Diego for an appointment with Yomi last summer, seeking respite from 30 years of constant tooth pain. After three root canals, a dental abscess, bone loss, and a dry socket from the shattered tooth, the 67-year-old was losing trust in human dentists.

“It was a painful tooth,” Tendler told New Times. “I had so much trauma with this tooth. I was so nervous about getting an implant.”

She was miserable and didn’t get much support from her local dentists. Then she heard about Yomi.

“It’s amazing to have been one of the first people in the world to do this,” Tendler said. “It never crossed my mind that I would get surgery from a robot in my life, but I’m happy with the outcome.”

Robotics has played a key role in medicine for more than 20 years.

In Belgium in 1997, Dr. Jacques Himpens performed the first robotic-assisted operation on a living patient, a gallbladder removal using a robot called Mona.

It’s only now beginning to permeate the dental industry, and the Chandler practice at Warner and Alma School roads is ground zero.

“Dentistry is so far behind,” Fish said. “Most dental treatment is worked on in fractions of a millimeter. How can a human perform each time with that level of precision?”

Even after two years, Yomi remains the only FDA-approved dental robot practicing in the country. But Fish predicts that after a decade, surgical cyborgs will be commonplace in dental offices around the world. Attached to Yomi’s robotic arm is a surgical drill that is always held and controlled by the dentist throughout the entire procedure. It provides haptic feedback to the dentist, should the human attempt any movement that deviates from the plan.

During the procedure, the arm securely guides the dentist’s hand as it grips the drill through the correct angle, direction, and premeasured depth.

Fish showed New Times how the robot works during a surgery at his Chandler practice on Thursday morning. A local elderly patient had four implants placed by another dentist in the area but one fractured. She only trusted Yomi to undo the damage.

“The robot can feel where it wants to put the implant,” Fish said. “It will only allow me to drill to the depth I have planned.”

It’s that level of precision that puts nervous patients like Tendler at ease.

According to Fish, some surgeons around the Valley are worried that as robotics proliferate in the industry, dentists will be put out of a job.

For the former director of a public health clinic in Casa Grande, leading him to fall in love with Arizona, robots are friends, not enemies.

Oral surgeons are trained to remove tooth decay down to the cellular level. Even the most advanced imaging technology today can’t compete with that human precision, while human dentists struggle to keep pace with the spatial accuracy of robots like Yomi.

“Surgery will never be 100 percent automated in the dentistry industry,” Fish prophesied.

But he left the door open for such a revolutionary leap in technology in the future.

“I don’t think it’s possible,” he said, “but technology does change, without a doubt.”